For every person that switches to a plant-based lifestyle 1,500+ animals are saved! By adopting a vegan diet you not only help the animals, but the environment and your health as well. Nutritional studies have proven that vegan diets are typically more healthful than those that include meat and dairy. Animal agriculture is a major contributor to polluting our air and land. It is also one of the the main causes of deforestation worldwide, and is an extremely inefficient use of our natural resources. It takes more than 2,400 gallons of water to produce just one pound of meat. Only 25 gallons of water are required to grow one pound of wheat.

Over the last 50 years, animal agriculture has evolved from small family farms to large corporate factory farming systems. The modern agribusiness attitude is profit margins at all costs, which has had devastating consequences for the animals in their care. Farmed animals lead a life of misery from the moment they are born to when they are slaughtered. Every day, everywhere across the globe, millions of these animals are mishandled, kept in confinement, mutilated as part of routine husbandry practices, and deprived of basic necessities. This is a problem YOU have the power to address with each meal you eat.

​We encourage you to research the issues with animal agriculture. If you want to directly help farmed animals the easiest choice you can make is is going vegan. By doing this you are empowering yourself as a consumer not to support, or benefit from, the cruel practices of animal farming.
Treatment of Animals
Factory farming is all about economics. The life, feelings, and desires of the individual animals bred into these awful places are never considered to be important. It is common place for very sick and injured animals to be left untreated in the hope that they will survive until they reach the slaughterhouse. Illness due to environmental conditions in the farms are so common that farmers simply feed antibiotics to all animals as a form of damage limitation, but veterinary fees to treat sick and injured individuals is not economically viable.

​In the U.S., an incredible 99 percent of farmed animals are now bred in factory farms. This means that due to current accepted regulations on animal welfare in these farms, 99 percent of farmed animals in the U.S. will never get to exhibit their natural behaviors. Pigs love to bathe in the sun, snuffle in the mud, and create complex social relationships, yet in factory farms, they are confined to tiny concrete pens for their entire lives. Chickens love to flap their wings and clean themselves in a dust bath, yet they never leave a cage which is so small, they cannot even stand up straight or extend their wings, ever. Cows are very maternal creatures who enjoy grazing in fields, yet they are also confined to concrete pens where all they can do is sit or stand.
​

In the dairy industry, calves are taken away from their mothers at birth and are sent off to veal farms where they will spend the rest of their short lives. The calves are not allowed to stay with their mothers as they would drink their mother’s milk, which is desired by the industry for human consumption instead. Dairy cows have been bred to produce up to 10 times more milk than they naturally would.

The natural lifespan of a cow is between 20 to 25 years. However, in factory farms, dairy cows are often considered to be “spent” by the time they have gone through just three lactation cycles, usually by 5 years of age. They are aggressively bred, fed, and drugged to produce as much milk as possible in the shortest amount of time, and this has a detrimental effect on their overall health and long term milk production. In the modern farming world, it’s more cost effective to send them to the slaughter at this early stage of life and have them replaced before their milk production decreases.

30% of dairy cows have mastitis, a bacterial infection of the udder. This means that pus is processed in with the milk humans consume.

Animals are forced to grow up to three times faster than nature intended. Due to selective breeding and the use of weight gaining drugs in feed, animals are forced to grow at an alarming rate. Chickens reach the weight desired for slaughter after just 35 days on a factory farm today, when this should normally take 90 days. They are also reaching that weight on less food. In the 1950s it took three pounds of feed to produce a pound of meat, now it’s just 1.7 pound of feed because of the drugs.

The obsession with creating as much meat as possible in the shortest space of time, with the least amount spent on food cost, means that as many as 90 percent of broiler chickens are unable to walk at all. The bones and muscles in their legs are unable to cope with the sheer weight of their bodies.

In many egg production farms, the practice of forced molting is used to trick the hens into higher levels of egg production. When their natural laying cycle ends, they are forced into another cycle by being placed into darkness for up to eight days and denied water and food. A huge number of hens die in the process, but is still considered to be “good practice” as it increases overall egg production on the farms.

Approximately 260 million male chicks are tossed into macerators upon hatching in the United States each year — they will not lay eggs or be used for meat and therefore have no economic value. This practice occurs in all egg farming systems, including organic and free-range.

Beak trimming is the permanent removal of part of the beak of a bird at a young age. This is standard industry practice despite being illegal in many European countries due to the pain it inflicts. United States farm law requires most animals, but not birds to be rendered insensible to pain before being slaughtered.

A battery chicken lives on space smaller than your iPad. Each chicken in a battery farm has to spend its entire life in a cage which has a floor space smaller than an iPad, no room to turn around, and certainly not enough space to stretch its wings. They also have to spend their entire lives standing on metal mesh flooring, which causes pain, discomfort, and injury to the feet and legs.

Globally, more than 66 billion chickens are reared annually in horrific conditions as a source of food, for both their meat and eggs. Every .05 seconds 97 chickens are killed globally. 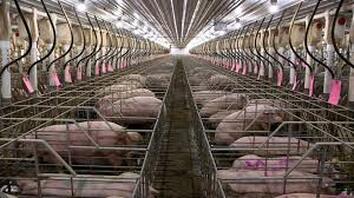 In the pork industry, piglets are weaned from their mothers after just two weeks so that the sow can be made pregnant again, as this increases the amount of litters she can produce each year.​

Piglets are mutilated within the first two weeks of life by having their teeth clipped, tails cut off, and testicles removed. This is done without anesthetic, and is incredibly painful to the animals. It is done to prevent the pigs from damaging themselves and each other when they become agitated and distressed due to their cramped living conditions.

More than 80 percent of pigs have pneumonia upon slaughter. The cramped dirty conditions which pigs are forced to live in on factory farms causes numerous serious health problems which are never treated. Dangerous gases from manure, including high levels of ammonia, cause pneumonia in over 80 percent of the factory farmed pigs entering U.S. slaughterhouses.

Pigs have an average lifespan of 15 - 20 years, but reach slaughter rate at 6 months old.

Fish and Other Sea Animals

Studies have repeatedly shown that aquatic animals such as fish, lobster, prawns and shrimp do feel pain. Evolution has given animals on earth the ability to feel pain as a means of self-preservation.

​A study in the journal Applied Animal Behaviour Science found that fish who are exposed to painful heat later show signs of fear and wariness—illustrating that fish both experience pain and can remember it.

A study by scientists at Queen’s University Belfast proved that fish learn to avoid pain, just like other animals. Rebecca Dunlop, one of the researchers, said, “This paper shows that pain avoidance in fish doesn’t seem to be a reflex response, rather one that is learned, remembered and is changed according to different circumstances. Therefore, if fish can perceive pain, then angling cannot continue to be considered a non-cruel sport.”

Three quarters of the world's fisheries are either exploited or depleted.

We kill between 1 and 2.8 trillion fish every year. This is 143-400x the amount of the entire human population.

308,000 dolphins and whales are unintentionally drowned each year after becoming entangled in fishing equipment.

Farmed salmon has 10x the amount of cancer-causing organic pollutants than wild salmon.

For every pound of fish caught, up to 5 pounds of unintended marine species are caught and discarded as by-kill.

In the United States, an estimated 2.2 million sheep and lambs and 1.5 million goats are slaughtered for meat every year. Sheep used for meat are typically slaughtered when they are only six to eight months old because consumers prefer lamb.

Every year around 4 million newborn lambs die within a few days of birth, mainly because of malnutrition, disease or exposure to cold weather.

Male lambs are castrated using elastration, a technique that involves a thick rubber band being placed around the base of the infant’s scrotum, obstructing the blood supply and causing atrophy. This method causes severe pain to the lambs who are provided no pain relief during the process. Lambs also have their tails docked using the same method.


Fast Facts
If the world went vegan, it could save 8 million human lives by 2050, reduce greenhouse gas emissions by two thirds and lead to healthcare-related savings and avoided climate damages of $1.5 trillion (according to a study published in PNAS)

The Economist’s “The World in 2019” predicted that veganism would be the most popular topic of the new year, declaring 2019 “the year veganism goes mainstream.” On the heels of this declaration, Forbes published an article predicting that 2019 would be the year more people “embrace a plant-based lifestyle.”

Approximately nine percent — more than 850 million — of the animals reared for food in the United States each year never make it to the slaughterhouse because they have already died from stress-induced disease or injury. Farm Animal Rights Movement

Global meat production is responsible for more greenhouse gas emissions than all of the trains, cars and airplanes in the world combined. United Nations Food and Agriculture Organization

Approximately 250,000 bulls are killed in bullfights throughout the world each year. Humane Society International

Approximately 25 million farm animals are slaughtered each day in the United States. Mercy for Animals

About nine million cows are being used for milk production in the United States at any given time. American Society for the Prevention of Cruelty to Animals

Approximately 450,000 calves are reared for veal in the United States each year. Compassion in World Farming

Approximately 100,000 horses are trucked from the United States to Mexico or Canada to be slaughtered for human consumption each year. American Society for the Prevention of Cruelty to Animals

An average of 24 horses die each week on racetracks in the United States. Compassion Works International

Farming and ranching are responsible for 68 percent of all species endangerment in the United States. United States Department of Agriculture

More than 330 million rabbits are farmed in tiny, barren cages across Europe each year. Compassion in World Farming

More than one billion rabbits are killed for their fur each year. People for the Ethical Treatment of Animals

There are more than 17,000 dog-meat farms in South Korea. Humane Society of the United States

More than 10,000 bears are being kept on bile farms in China. Animals Asia Foundation